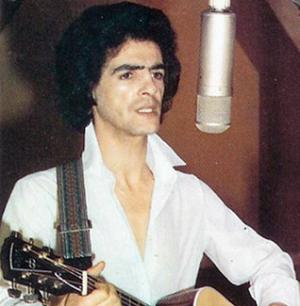 MEKSA Abdelkader was born on June 4th, 1954 at Mira (Timizart) situated in Kabylia. Right after the University graduation on computer science field, he joined the Kabylian radio station at Algiers where he offered his valuable services, with dedication, to the promotion of the culture and music against the Algerian discriminatory and primitive laws aiming to annihilate all the remaining ethnographic marks on the area as well as the surroundings.

Meksa’s considered among the pillars of the worldwide Kabylian music. In spite of his fleeting life of just 34 years, his universal musical masterpieces namely “Ballads and legends from Kabylia” enhanced the ethnic repertory and remain accordingly as being a symbol of an “alive legend” of all times insofar as it represents a deep soul as tremendous as the Celtic civilization’s been.

He formally moved to Paris in 1976 where he met his wife Natalie. The upside of the overseas life opened the doors anew to an exciting artistic perspectives. He devoted himself as eagerly and actively as ever to express an intellectual perception of the ancestral traditions throughout an authentic universality; a highly appreciated symphonies wherever the humanity’s been getting roots in an unshakable and peaceful manner …

Unfortunalety, a rich musical career ended too early with dramatic and painful loss of the undeniable militant of the fair human cause. His last posthumous masterwork had been published right after his death: in 1989 (« Amghar Azemni » or « the Wiseman »). He died on October 30th, 1988 at Créteil (France) at the age of thirty four due to a car incident referring, of course, to the maliciously pretended statements made by the famous Algerian military government as totalitarian and tyrannical as George Orwell’s illustration of Big Brother’s woeful and unfortunate world¸ regarding undoubtedly numerous other murdered Kabylian militants as a result of their restless commitment and activism in a view to bring back the breached liberty light to their oppressed people since many centuries as well as to the humanity globally.

Therefore, his complicated death’s still suspected till nowadays and the matching file’s still under legal french investigation which Meksa’s only one daughter and family members have been conducting.

In a nutshell, Meksa remains eternally the Kabylian hymn for the freedom and the human values since he contributed strongly and in the most delightful and intellectual way to bring back life to a society called “Kabylia”.