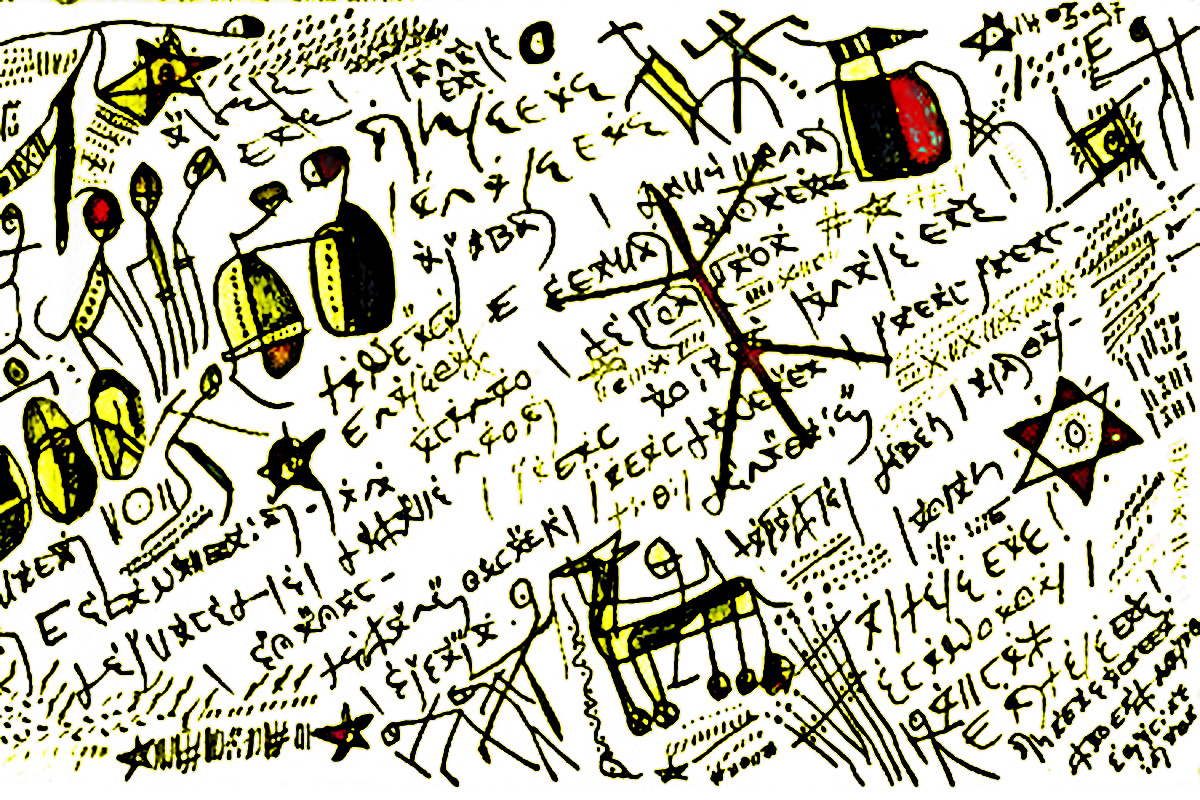 This is a short essay to argue for the antiquity and primacy of Berber language within the afro-asiatic family and to refute the erroneous claims of certain semitistic and crypto-semitistic linguists (Brockelmaim, Cohen et al) who tried hard to semiticize Berber by implicitely suggesting to us that Berber is a quasi-Semitic language hence strengthening the false claims of the traditional enemies of Tamazight: the arabo-islamists who consider Tamazight as a mere constellation of related dialects derived from an old archaic form of Arabic.

Berber or Tamazight, the native language of North Africa, is under siege, at present, from two main camps: the camp of what i call the tribal-ethno-centrists who undermine its unity and talking of Berber languages instead of one language, Tamazight. They are mainly kabylian autonomist militants (and also some chawi militants as well), under the influence of some anglo-saxon amateur uninformed Berbericists, and fueled by blind narrow petty tribalo-nationalism. I am a supporter of MAK and wholeheartedly for the self-determination of Kabylia and other Amazigh regions but i also deplore any attempt to undermine the unity of our language which is self-evident. The other more serious danger to Tamazight comes from its traditional enemies: the Arab-islamists who -while they finally recognized Tamazight as national language in Algeria and as official language in Morocco- keep maintaining that Tamazight is descended from Arabic (Berbers came from Arabia according to them) and that it should be written in Arabic characters and enriched (or rather impoverished, a more correct term), with Arabic vocabulary. this way, they are hoping, it will eventually dissolve into Arabic and finally wither and die. Few years back an Arab-islamist Qaddafist pseudo-linguist named Othmane Saadi wrote a book in Arabic entitled: Dictionary of the Arabic Roots of Amazigh(Berber) Words(Tripoli: Academy of Arabic Language 2007).

The fact that this man – who falsely claims to be a proud Berber chawi- is the head of the Algerian official body for the defense of Arabic language and that his book was published in Tripoli says more than enough about his ideological motives to undermine Berber language in favor of the language of his masters, Qaddafi et co.
moreover, it could be just the opposite that is true: Arabic vocabulary may have derived from that of Berber.

There are many factors which suggest the antiquity and primacy of Berber, although here i confine myself to just two:
-The fact that Berber has much more affinities with the much older languages of the Afro-Asiatic family such as Egyptian and Akkadian than with the relatively younger ones such as Arabic.
-The fact that many tri-consonantal roots in Arabic and other Semitic languages seem to have derived from Berber mono-consonantal and bi-consonantal roots.

Akkadian and Egyptian are considered as the oldest (albeit now dead) Afro-Asiatic languages that survived to the present day in the archaeological forms of cuneiform and hieroglyphic inscriptions respectively. One of the main obvious similarities between Berber, Akkadian and old Egyptian is to be found in their pronouns.

With Arabic there is no apparent similarity at all but with Akkadian and Egyptian we have two similar pronouns(the first persons):
1st person.

with Arabic the third persons(Arabic hu/hi, ha , hum, hunn) are totally different whereas with Akkadian and Egyptian , apart from the second singular feminine person, all other pronouns are similar:

Despite my deep respect, gratitude and admiration for the berber linguist Professor Salem Chaker i find his ‘crypt-semitistic’ claims that many Berber mono-consonantals and bi-consonantals(mono-literals and biliterals) are derived though long overuse from tri-consonantal (triliterals) to be totally unfounded .

His main argument was that many mono-consonantals, bi-consonantals in some varieties of Tamazight (northern group ) have bi-consonanatal/tri-consonantal forms in other more conservative varieties(southern group:Touareg and Chleuh). But these latter varieties are only conservative in the sense of being less influenced by foreign lexical borrowings and not in their intra-linguistic evolution. When we look at the examples that he puts forward we realize instantly that the supposed tri-consonantal roots are hardly tri-consonantal at all because neither the pharyngeal hissing /h/(/h/ siflant) nor semi-vowels /w/ and /y/ can be qualified as full consonants in Berber. these are the main letters we find in the examples he gives us . /h/ is more a semi-consonant than a full consonant (in some languages like French it is actually totally silent!!!) and /w/ and /y/ are interchangeable between themselves and between them and the long vowels(a,y,i) and hence considered as semi-vowels.

A relevant banal analogy is the binary machine code: when they started with two digit numbers they could get only about four numbers(00 01 10 11) but as they added more digits they got more numbers.

Prof Chaker dismissed unreasonably this opposite view posited by many researchers in the field (Botterweck 1952;Diakonoff 1965, 1988; Vycichl 1983; Vogt 1988). A titre d’example i cite here K. Luke who, in his The nature of The Semtic Root, concludes:”the Semitic root was originally bi-consonantal…” and he gave the example of how different secondary tri-consonantal roots with similar meanings are derived from one primary bi-consonantal root:

From bi-consonantal /par/ ”to break” we have the tri-consonantals /paras/, /paraq/, /parar/ with very close meanings of ‘to break, to separate”(the Berber equivalent is /fru/= ”to open, to resolve” from which we have /frn/ ”to separate, to weed off, to select”)

Zuckerman also noticed the same phenomenon in Hebrew as illustrated in the following similar examples:

from /g-zz/ ‘shear’, we have /g-z-m/ ‘prune’ and /g-z-r/ ‘cut’,
from /p-r-‘/ “arch, bend”), we have /p-r-z/ ‘divide a city’, /p-r-ţ/ ‘give change’
from /q-p/ “bend, arch, lean towards” we have /q-p-ħ/ and /q-p-h/,
and some roots are constructed using the Berber instrumental/causitive particle /s/ (rendered as /sh/ in hebrew ) as in the case of /sh-q-p/ “look out/through” from /q-p-‘/ ‘pay a debt’.”
or sh-ţ-p ‘wash, rinse, make wet’, from ţ-p ‘wet’, or sh-l-k ‘cast off, throw down, cause to go’, from l-k ‘go’
(see .Zuckermann, Ghil’ad 2003, ‘‘Language Contact and Lexical Enrichment in Israeli Hebrew’’) and many of the mono-consonantals and bi-consonantals which are still in daily use in different varieties of Tamazight seem to be the origins of many bi-consonantals and tri-consonantals in Arabic and other Afro-Asiatic languages(a process identical to the one just given by Luke and and Zuckermann regarding Hebrew):

Example 1:
– Berber primary biconsonanatal root:/rgh/ or /rq/ ”to burn, to light, shine”.
– Arabic secondary triconsonnatal roots: /h’rq/ ‘to burn”, /brq/ ”lightening”, /chrq/ ” to shine like a sun”, /trq/ ”to appear like a star, to visit during the night’, /mrq/ ”to make hot soup (with fire)”. /ghrq/ ”to drown, lit.arch. to be burnt by salty sea water”, /zrq/ ”shining blue”
Example 2:
– Berber primary biconsonantal root :/nb/ ”to rise/grow/produce from ground, to develop into higher stage ), hence the berber noun /anubi/ ” someone who is developed/grown into an adolescent”
– Arabic derived secondary triconsonantal roots: /nbt/ ”to grow/produce (a plant) from ground” , /nbch/ ”to dig up ground” , /nba’/ ”to spring up(spring water) from ground” , /nbgh/ ”to rise/develop into an expert ” , /nbl/ ”to rise/develop into a noble person ”, /nbr/ ” to rise/produce a sound from striking a string”, /nbh’/ ”to bay(a dog), to rise /produce a sound from the stomach”, /nbd/ ” to rise/produce alcohol from fermented fruit ”, /nba/ ” to develop/produce prophetic powers” etc..

All these Arabic roots in these two examples contain the Berber parent roots of /rq/ and /nb/ respectively and carry some of their primeval meanings. It is just intuitive common sense that when one needs to build up more roots from the existing primary fundamental root one would just add different letters to it.

Recent discoveries in the field of Berber lexicometry reveals that most roots of the Berber semantic primevals are monoconsonantal or biconsonantal ( these roots are also used to form the magico-mystical vocabulary): /ini/, /ili/, /as/, /ali/, /agh/, /awi/, /ddu/, /af/, /li/, /uc/ etc…

And from this primordial paleo-berber core lexicon that the rest of the Berber and the afro-asiatic vocabulary seems to have been derived.
And if the foregoing is not convincing enough i add this passage by Abdelaziz ALLATI from his :

We have demonstrated that Berber is very old and archaic comparing to other living Afro-Asiatic languages such as Arabic by examining some grammatical affinities between Berber and other old Afro-Asiatic languages such as Accadian and Ancient Egyptian and also by highlighting the Berber origins of many Arabic and other Semitic lexical roots. This is not a new discovery, for as early as the ninteenth century, western Berberologists such as Hodgson have noticed the undenaible great age, antiquity, unity and primitive lexical conservatism of Berber despite being continously a persecuted oral language with many varieties scattered over large disparate areas through north africa and sub-sahara.

1. Egyptian has many biradical and perhaps monoradical roots, in contrast to the Semitic preference for triradical roots.1. Egyptian probably is more archaic in this regard, whereas Semitic likely underwent later regularizations converting roots into the triradical pattern.1.

2. Although Egyptian is the oldest Afroasiatic language documented in written form, its morphological repertoire is greatly different from that of the rest of the Afroasiatic in general and Semitic in particular.2. This suggests that either Egyptian had already undergone radical changes from Proto-Afroasiatic before being recorded, that the Afroasiatic phylum has as of yet been studied with an excessively semito-centric approach, or that Afroasiatic is a typological rather than genetic grouping of languages.2.
a 1. b 1. Loprieno (1995:52)