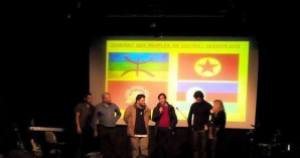 PARIS (SIWEL) – Within the framework of the «ANTI-COLONIAL WEEK », the kabylian people took part in the concert of the peoples without states, on Friday 20th of February at 7 pm. The kabylian people joined in through the Anavad network and the young singer Mourad Soumam.
The Anavad (Kabylian Provisional Government) minister, in charge of kabylian culture and language, Gaya Izennaxen marked the event with his presence and his intervention was greatly applauded by the audience and the representatives of the other attended peoples (TAMOUL (Tamil Nadu and Sri Lanka), KANAK (New Caledonia), KURDISH( Kurdistan) and Riff

The minister of kabylian culture and language was keen on to pass the respect of the Anavad president Mr. Ferhat Mehenni on to the peoples who fight for their existence and freedom right. He’s also keen on to denounce and condemn the indifference of world that sees our cultures and our identities put to death without reacting.
«We are upset and distressed to see the world said to be free turns away from our struggle for our most fundamental rights, but seeing today all these peoples, riff, kurdish, kanak and kabylian united in order to get their rights to existence, gives us hope», concluded Gaya Izennaxen.
At the end of the concert, the kabylian minister, came with Yasmina Oubouzar, Spokeswoman of the MAK (Movement for Self-determination of Kabylia) abroad , met in the green room the singer Mourad Soumam so as to greet him and give him the president of Anavad (GPK) Mass Ferhat Mehenni’s warm regards.