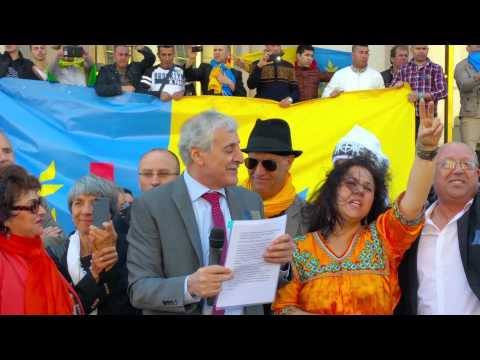 The Anavad condemns the massacres perpetrated by the islamist terrorists of the Islamic State (Daech) against Kurdish civilians in Kobani, as it denounces and condemns the islamist attacks which have just taken place in France and in Tunisia.

The Provisional Government of Kabylia expresses its solidarity with all the victims of these criminal acts perpetrated in the name of religion in Kurdistan, in France, in Tunisia and everywhere in the world where they continue to generate and intensify, as it was the case during the massacre perpetrated by the islamists on young students in Kenya. The fight against the islamist terrorism requires increased vigilance throughout the world and more effective international coordination against the spread of a plague which spares no people, the proof is that France has just been victim of the first beheading on its own land perpetrated by the islamists.

It is obvious tha the fight againt the islamist terrorrism cannot be done with partners themselves islamists, for some benevolent towards terrorrism itself, and yet for others, the source of financing and the spread of the ideology which conveys it.

The Anavad calls on the international community to support, including on the ground, the Kurds’ struggle in the northern Syria against the barbarian troops of the Islamic State. The kabyle and the Kurdish peoples are the most hostile to the islamist terrorrism and to its ideology. The western world must support them in order to restrain and then get rid of any threat of islamist fundamentalism. The Anavad is in solidarity with the call launched by the Kurdish democratic council in France in order to condemn this barbarism.

These attacks which occur in the wake of the 17th year commemorating the assassination of the kabyle people icon, Matoub Lounès, remind us the duty remembrance with regard to this great artist and to all the victims of this barbarism which wraps itself in false religious clothes while serving ulterior political interests which wreak bloody havoc on the whole world.

It is time for the West to reconsider its alliances and its friendships at the risk of plunging the whole world into the islamist violence.

Paris on June 26th, 2015 Ferhat Mehenni, President of the Anavad