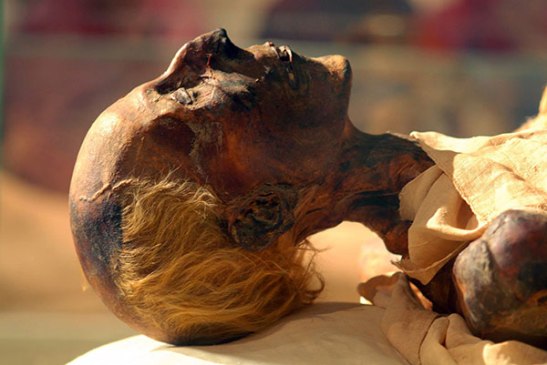 The analysis of the Pharaoh Ramesses II

The mummy was examined in 1886 by Gaston Maspero and Dr. Fouquet, first thorough investigation of the mummy. The investigations were carried out with the means of the time: detailed observation of the body, various measurements.

In 1974, to determine the causes of death of Ramesses II and other mummies, including that of Merneptah, investigations were undertaken under the direction of Maurice Bucaille with Egyptian colleagues and a dozen other French collaborators in various medical disciplines. The results were communicated among others, the Academy of Medicine and the French Society of Legal Medicine. His book The Mummies of the Pharaohs and medicine presents the final results of his research.

Many modern techniques were used, radiological and endoscopic explorations, investigations in the dental field, microscopic research, forensic, etc. A find of great importance due to the use of X-ray films of high sensitivity allowed to show the existence of a very serious injury to the jaw of Ramses II, extensive osteomyelitis of the lower jaw of dental origin. Maurice Bucaille concludes that these injuries were probably fatal condition that the king did not have other undetected serious diseases (due to the inability to examine the chest organs associated with mummification) and that could be the pharaoh who pursued Moses and the Hebrews, for he died in frightful suffering resulting total physical disability.

A study of the mummy of Ramesses II, the Museum of Man in Paris in 1976, concluded that the pharaoh was a “leucoderma, Mediterranean type similar to that of North African Amazigh”.

Pharaoh Ramesses II (of the 19th Dynasty), is generally considered to be the most powerful and influential King that ever reigned in Egypt. He is one of the few rulers who has earned the epithet “the Great”. Subsequently, his racial origins are of extreme interest.

In 1975, the Egyptian government allowed the French to take Ramesses’ mummy to Paris for conservation work. Numerous other tests were performed, to determine Ramesses’ precise racial affinities, largely because the Senegalese scholar Cheikh Anta Diop, was claiming at the time that Ramesses was black. Once the work had been completed, the mummy was returned in a hermetically sealed casket, and it has remained largely hidden from public view ever since, concealed in the bowels of the Cairo Museum. The results of the study were published in a lavishly illustrated work, which was edited by L. Balout, C. Roubet and C. Desroches-Noblecourt, and was titled La Momie de Ramsès II: Contribution Scientifique à l’Égyptologie (1985).

Professor P. F. Ceccaldi, with a research team behind him, studied some hairs which were removed from the mummy’s scalp. Ramesses II was 90 years-old when he died, and his hair had turned white. Ceccaldi determined that the reddish-yellow colour of the mummy’s hair had been brought about by its being dyed with a dilute henna solution; it proved to be an example of the cosmetic attentions of the embalmers. However, traces of the hair’s original colour (in youth), remain in the roots, even into advanced old age. Microscopic examinations proved that the hair roots contained traces of natural red pigments, and that therefore, during his youth, Ramesses II had been red-haired. It was concluded that these red pigments did not result from the hair somehow fading, or otherwise altering post-mortem,but did indeed represent Ramesses’ natural hair colour. Ceccaldi also studied a cross-section of the hairs, and he determined from their oval shape, that Ramesses had been “cymotrich” (wavy-haired). Finally, he stated that such a combination of features showed that Ramesses had been a “leucoderm” (white-skinned person).

Balout and Roubet were under no illusions as to the significance of this discovery, and they concluded as follows:

“After having achieved this immense work, an important scientific conclusion remains to be drawn: the anthropological study and the microscopic analysis of hair, carried out by four laboratories: Judiciary Medecine (Professor Ceccaldi), Société L’Oréal, Atomic Energy Commission, and Institut Textile de France showed that Ramses II was a ‘leucoderm’, that is a fair-skinned man, near to the Prehistoric and Antiquity Mediterraneans, or briefly, of the Berber of Africa.”

It is interesting to note the link to the North African Berbers: some Berber tribes, such as the Riffians of the Atlas Mountains, have incidences of blondism reaching almost 60%, and they have a percentage of red-haired people which is comparable to that of the Irish.

These facts have not only anthropological interest however, but also great symbolic importance. In ancient Egypt, the god Seth was said to have been red-haired, and redheads were claimed to have worshipped the god devoutly. In the Ramesses study cited above, the Egyptologist Desroches-Noblecourt wrote an essay, in which she discussed the importance of Ramesses’ rufous condition. She noted that the Ramessides (the family of Ramesses II), were devoted to Seth, with several bearing the name Seti, which means “beloved of Seth”. She concluded that the Ramessides believed themselves to be divine descendants of Seth, with their red hair as proof of their lineage; they may even have used this peculiar physical feature to propel themselves out of obscurity, and onto the throne of the Pharaohs. Desroches-Noblecourt also speculated that Ramesses II may well have been descended from a long line of redheads.

Her speculations have been proved correct: Dr. Joann Fletcher, a consultant to the British Bioanthropology Foundation, has proved that Seti I (the father of Ramesses II), had red hair. It has also been demonstrated that the mummy of Pharaoh Siptah (a great-grandson of Ramesses II), has red hair.

We may also note the anthropological description of Ramesses’ mummy, which was written by the Biblical historian Archibald Sayce:

“The Nineteenth Dynasty to which Ramses II, the oppressor of the Israelites, belonged, is distinguished by its marked dolichocephalism of long-headedness. His mummy shows an index of 74, while the face is an oval with an index of 103. The nose is prominent, but leptorrhine and aquiline, and the jaws are orthognathous. The chin is broad, the neck long, like the fingers and nails. The great king seems to have had red hair.”

All of these features are characteristics of the Nordic race. Finally, we should note that Professor Raymond Dart declared that the Nordic race was the “Egyptian Pharaonic type”. He then went on to state specifically, that the head of Ramesses II is “pelasgic ellipsoidal or Nordic” in type.